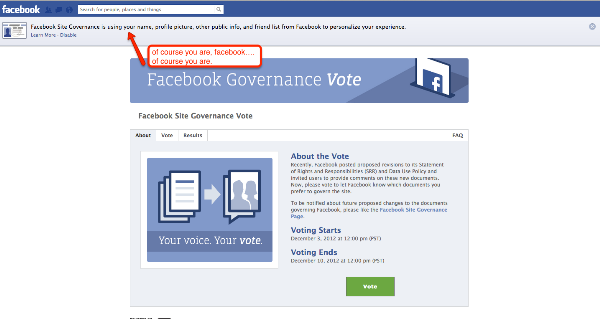 In case you haven't heard, Facebook users have one week to vote on the proposed changes to Facebook's policy, including the ability of users to vote on future privacy changes.  Basically, they are asking you to vote on your right to vote.

While browsing CNN I came across the article talking about this and was a little surprised that I hadn't seen a single mention of it on Facebook itself.  I tried finding the page where I was supposed to vote or even the page that talked about this but didn't have much luck.  Maybe I wasn't looking in the right places but I found that to be a little discouraging.  With all of the crap Facebook pushes in your face with sponsored posts and suggested posts, you'd think they might throw in something about this every once in awhile.  When I finally did get to the Facebook Site Governance Vote page (after using the link given by CNN) I was told -

Ok, fair enough.  I guess what was a little shocking to me was that only 3 of my friends had already liked the page and only 2.6 million of the ONE BILLION users had liked the page.  So maybe that's why I hadn't heard anything about this Facebook vote.  Hmmmm....

So, consider this your announcement.  Go to the page, read the documents and vote one way or another.  Just be thankful you have a friend like me making sure you are informed.  :)